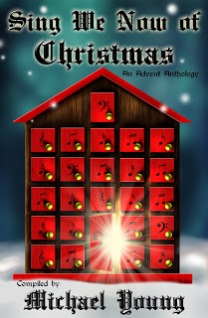 Welcome to day 5 of the Advent Event! Please share this event with your friends. The more anthologies we can sell, the more money we can raise for the National Down Syndrome Society.

Or visit this site for more information: http://adventanthology.wordpress.com

Here’s a look at the next two stories:

“The Blessings of Christmas” by Cheri Chesley

Little David had no family. He had no home. He had only the clothes on his back, his worn sandals, and the small drum his father had made for him. David slept under a torn canvas that hung from the wall behind the fish seller’s stand. It always smelled bad, but David could not be picky. At least the canvas kept the wind off him during the long, cold nights.
During the day, Little David stood between the fish seller’s stand and the stand belonging to the man who sold sugared dates. He beat out tunes he had learned on his drum and then held out his worn cap so passers-by could toss coins into it. On a good day, he made money to buy enough food so his stomach didn’t keep him awake that night. He rarely had good days.
One afternoon as the merchants closed up their stands, David stood in his place, beating out a favorite tune on his drum. People hurried past him, eager to get home before the sun set completely and the winds picked up. No one stopped to drop a coin into his hat. Little David looked longingly at the bread shop across the marketplace. He would not have enough money to buy his dinner.
Just then a woman stopped and placed a coin into his hat. “You play very well,” she said and smiled at him.

Stocking Stuffers, by Michael D. Young
‘Twas the night before Christmas, and though her husband had settled down for a long winter’s nap, Theresa lay wide awake. While her husband dreamed of sugarplums, she could only think about cookies, specifically the ones on her side table next to the Christmas tree.
Last year, the cookies had vanished, replaced by a note written in meticulous calligraphy. It read:
Dear Fellow Cookie Connoisseur,
We regret to inform you that St. Nick has developed a slight peanut allergy. In order keep him jolly, we humbly request that your Christmas cookies be nut-free next Christmas. Thank you for your attention in this matter.
Sincerely,
I.M. Fudge
At first, she was convinced that her husband, who had a peanut allergy, was playing a prank on her. A subsequent amateur handwriting analysis, however, proved this theory incorrect. It turned out that no one in the family could produce a single letter of calligraphy, even at the threat of a present-less Christmas. She had no other choice but to concede that a denizen of the North Pole had written the note.

And here a look of one of the prizes:

A signed copy of “Life is Like Riding A Unicycle.” by Shirley Bahlman.